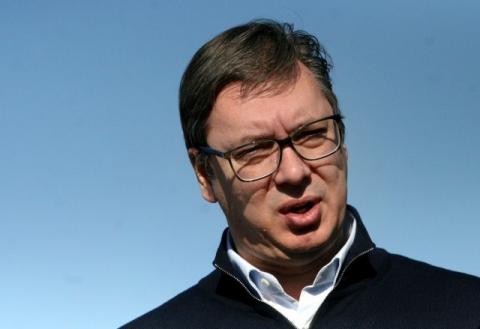 Speaking of demarcation, he says he realized that the Serbs would never accept something that was our chance and that we would regret it dearly.
"I understood the message of the people, it was a great chance for us, but we missed it", Vucic told TV Happy.
He says we will do worse in the future, but no one will be able to blame him.
"I will defend the Serbian people, but remember my words in 20 years: we had a chance, but we did not have enough awareness and wisdom", Vucic said.
On the occasion of the 12th anniversary since the unilateral declaration of Kosovo's independence and the message of Mike Pompeo to Pristina that Kosovo's sovereignty and independence are a guarantee of peace, he points out that they gained independence thanks to the United States and Germany.
"What do you expect, do you think they will change their minds and withdraw that, or that Serbia can change their positions after the lost war conflict? Where is the logic," Vucic points out.
On charges that he was a traitor and wanted to betray Kosovo, he said the west was silent as well.
"They didn't say that anything was agreed on, for something that didn't happen. All the time, they say 'it might happen any time soon', and I didn't hide anything from the people. I said what I was in favor of, but nobody wanted it", Vucic explains.
He points out that the agreement between the Serbs and Albanians did not suit anyone and that he did not find support either in the east or in the west, because that agreement brings 100 years of peace and development and a future and security for children.
"No one would be happy about that. Some would be dissatisfied because for them only humiliated Serbia is the final solution. The others would find it satisfying...