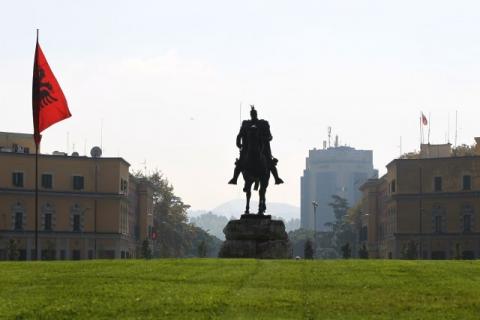 Albanian Acting Foreign and European Affairs Minister Gent Cakaj said he had proposed to Pristina to launch a campaign to recognize the unilaterally declared Kosovo state through joint funding.
According to the Pristina's "Gazette Express" newspaper, Cakaj said that he suggested to Kosovo Foreign Minister Glauk Konjufca that they sign the agreement and undertake joint lobbying to recognize the so-called state of Kosovo.
He suggested that two agreements be signed at the forthcoming session of the Pristina and Albanian governments in Shkoder: sharing of costs in the lobbying campaign and the other concerning the transfer of experience in the European integration process.
Cakaj is an Albanian from Kosovo, who is member of the cabinet of Albanian Prime Minister Edi Rama as Minister of Foreign and European Affairs.
The President of Interim Pristina institutions, Hashim Thaci, said today that Cakaj had given this idea new hope and dynamism at times, as he described, of "the consolidation of the country."
Thaci, according to the Pristina "Gazette Express", said that Cakaj confided in him that "Kosovo has been one of his duties and commitments since the first day of his engagement within the Albanian Foreign Ministry".
After the interview, Thaci thanked Cakaj, who told him that wherever he represented Albania, he did the same for the so-called Kosovo.
This is Cakaj's first visit to Pristina today.
"Gazette Express" recalls that Cakaj is credited with forming a coalition of Albanian parties from the three municipalities of south-central Serbia in the upcoming parliamentary elections.