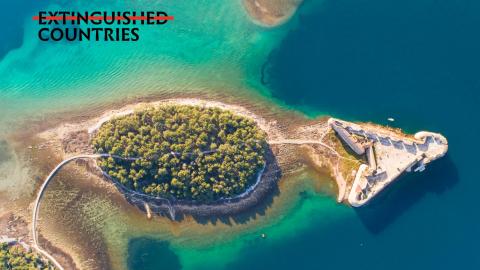 It features some 40 towns and cities in seven countries - Italy, Slovenia, Croatia, Montenegro, Albania, Greece and Cyprus - all of which were once part-ruled by the Venetian Republic.

Vale says that although the Venetian state hasn't existed since 1797, it has left behind it a powerful heritage in terms of culture, architecture, gastronomy and language, which he seeks to explore.

Publication of the book is in the pipeline. To raise funds for the print run, they will soon launch a crowdfunding campaign.

"Everywhere in the world, but especially in Europe, countries and the shapes of the borders have changed many times, and if we look through these extinguished countries or past experiences, there are some cultural things - references that circulated at that moment - that are still part of our identity today," Vale says.

He sees food as one example, noting that a typical Dalmatian dish, called "pasticada" - stewed beef cooked in sauce - dates back to the Venetian Republic, and is still cooked in Italy, in Greece, as well as in Dalmatia, with only a different side dish, or another type of meat.

"Those are the little things; let's say that [while] the geography of states changes, you still have things in common that you don't expect with your neighbour," he observes.

Exploring the legacy of centuries of Venetian rule in the Mediterranean and Adriatic, Vale came across interesting insights.

The town of Rovinj, for example, which is now in Croatia, he notes, found many ways to avoid obeying the rules and paying the taxes of the Venetian authorities. "At the time of the...