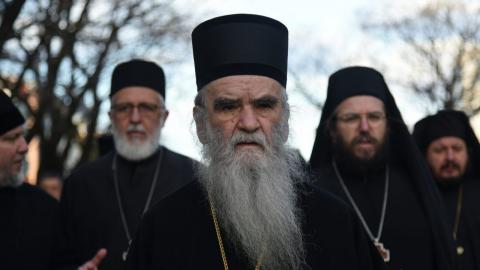 Parliamentarians in Montenegro from the main opposition Democratic Front, DF, have demanded the resignation of the management of the public broadcaster, RTCG,

They made the call after RTCG broadcasted a documentary about the head of the Serbian Orthodox Church in the country, Metropolitan Amfilohije.

DF leader Andrija Mandic called on the broadcaster's Council to dismiss the leadership within 24 hours.

"Such shows seek to sow evil seeds and spark a fire that no one can put out. That is why we invite the CEO of RTCG and all the executives to resign, especially those who signed up to be the editors and organizers of this shameful show," Mandic said on Wednesday.

At the centre of the storm was a documentary on the the bishop aired on prime time on Tuesday called "Witness to the Love of God", which called him "an envoy of a foreign church" and "a fanatical follower of the Great Serbian project". It featured archival footage of Amfilohije and some footage that had never been released in public.

The bishop has long been a thorn in the side of the pro-Western government, opposing the country's independence from Serbia, its more recent membership of NATO and progress on gay rights, among other things.

More recently, he has been at the forefront of street protests against a new law on religion that his Church says could be used to target its assets.

The editor of the church radio station, Svetigora, Fr Nikola Pejovic, accused the broadcaster of running a media campaign against the Church, and said the documentary "buried objective and investigative journalism".

"We will soon translate the documentary and send it to all relevant international addresses, who are already concerned about the state of the media in Montenegro....