170,000 people living in the open in northwestern Syria: UN 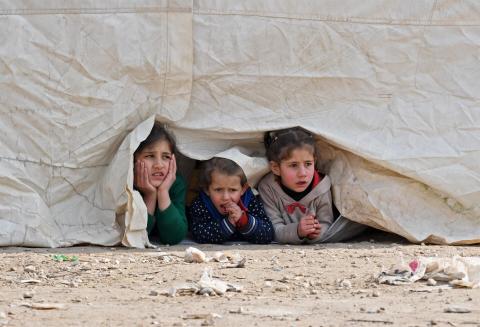 An estimated 170,000 of the 900,000 civilians forced from their homes in a massive wave of displacement in northwestern Syria are living out in the open, the U.N. said on Feb. 20.

The largest displacement since the civil war in Syria broke out nearly nine years ago comes in the thick of winter, with temperatures often dipping below zero Celsius and snow covering some districts.

"Harsh winter conditions further aggravate the suffering of these vulnerable people who fled their homes to escape the violence, most of whom have been displaced multiple times over nine years of conflict," the United Nations said.

In its latest update, the U.N. Office for the Coordination of Humanitarian Affairs said around a fifth of those newly displaced were sleeping rough.

"Almost 170,000 of those newly displaced people are estimated to be living in the open or in unfinished buildings," it said.

The U.N. said that the camps sheltering some of the rest were overstretched and that many families were pitching tents on plots with no access to basic services such as latrines.

The U.N.'s top humanitarian coordinator Mark Lowcock had warned earlier this week that a ceasefire was needed to avert a humanitarian disaster on a scale yet unseen in the Syria war.

But in a Feb. 19 vote at the U.N. Security Council, Russia unsurprisingly blocked a resolution demanding a ceasefire in northwestern Syria.

Backed by Russian warplanes, Syrian regime and allied forces have been closing in on the last bastion of armed opposition.

A pincer movement of forces thrusting their way into Idlib from the south and from Aleppo province to the east is boxing holdout rebels into an ever-shrinking enclave.

Economic confidence index at 91.8 in March