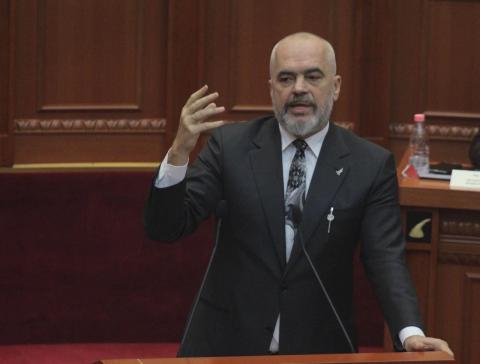 The Association of Journalists of Kosovo, AJK, has criticised Albania's Prime Minister Edi Rama for posting his agreement on Facebook with an Albanian academic who has accused Kosovo media outlets of spreading hate speech against Albania.

"I found it impossible not to share it with you," Rama wrote, on Tuesday, referring to Rexhep Qosja's earlier post, which accused the media outlets T7 and Gazeta Express of spreading "chauvinist hatred against Albania".

Qosja said these media were even worse than the hate figure of the former Serbian leader Slobodan Milosevic. They had excelled "the Prime Minister of royal Serbia, Nikola Pashiiq [Pasic], or the Minister of State Security, UDB, of Serbia and Communist Yugoslavia, Aleksandar Rankovic, or the pseudo-democratic fascist Serbian President Slobodan Milosevic, who so desperately wanted Albania's dissolution", he said.

Supporting these claims, Rama accused the Kosovo media of waging "a ferocious invasion of the public communications space that, with its vulgarity, defamation and shortsightedness, has begun to damage Kosovo itself".

The AJK said, via a press release on Wednesday, it considered Rama's attacks a violation to the right of press freedom, "especially given the Prime Minister's poor rapport with the media in Albania".

Media lawyer Flutura Kusari told BIRN Rama had already become "famous for all the wrong reasons internationally" due to his repeated attacks on journalists, often targeting women journalists in particular.

According to Kusari, Rama was annoyed by the Kosovo media because his government could not bear different opinions, which was why he was now "trying to contaminate the public space in Kosovo as well".