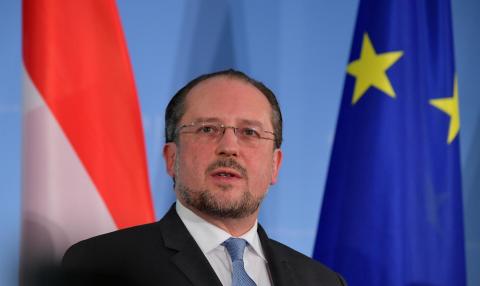 Alexander Schallenberg said after meeting his German counterpart in Berlin that he will be taking a "European message" to Tehran on Feb. 22 and Feb. 23 after also meeting the European Union's foreign policy chief, Josep Borrell, this week.

Tensions have been escalating steadily since 2018, when President Donald Trump pulled the U.S. out of Tehran's nuclear deal with world powers. The Trump administration reimposed crippling sanctions on Iran as part of its "maximum pressure campaign" on the Islamic republic.

Iran since has begun breaking terms of the 2015 deal limiting its enrichment of uranium.

The remaining signatories the European trio of Germany, France and Britain, plus Russia and China have been trying to keep the deal afloat. While Austria is not part of the agreement, the deal was negotiated in large part in Vienna.

Europeans agree that "we must contribute everything to the situation being de-escalated," German Foreign Minister Heiko Maas said. He stressed that "the 'maximum pressure' strategy is not promising in our view, but we have increased the pressure on Iran," and welcomed Schallenberg's trip.

The Europeans have invoked a dispute resolution mechanism designed to resolve issues with the deal or refer them to the U.N. Security Council.

Schallenberg said that "it is also important ... to repeat our points it's not enough to have said them once."

EC Sent Letter to Bulgaria About the Citizenship by Investment Scheme

Russia Accuses US of Plotting ‘Coloured Revolution’ in Moldova

The Pentagon is sending tanks to the Balkans?