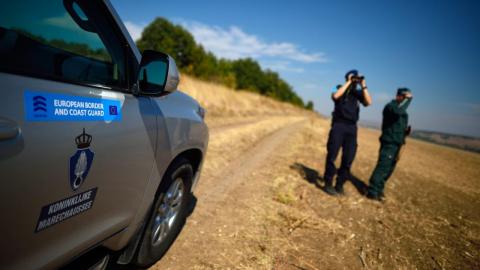 Amid an ongoing dispute over a Constitutional Court ruling that has angered Bosnian Serb politicians, Milorad Dodik, the Serbian member of the state presidency, has stopped Bosnia from signing up to a status agreement with the European Union border agency, Frontex.

At the last session of the three-member Bosnian presidency, Dodik voted against all decisions that were on the agenda. One was the proposal of the Minister of Security, Fahrudin Radoncic, to accept an "Agreement on Status between Bosnia and Herzegovina and the European Union on Actions Executed by the Agency for European Border and Coast Guard in Bosnia and Herzegovina".

Frontex had offered to deploy its forces along the Bosnian border to prevent illegal migration - but for that to happen, it needs a so-called Status Agreement.

Frontex has already had concluded similar agreements with Montenegro and Serbia. A Status Agreement with North Macedonia is in the works.

Bosnia's short-staffed border police are missing at least 1,000 officers needed to adequately guard the eastern border, which is where most migrants cross over, a Border Police spokeswoman told BIRN earlier.

Border Police Director Zoran Galic warned in late January that Bosnia should expect a new major migrant wave in the spring, and said the Border Police did not have the capacity to guard the 650-kilometre border with Serbia and Montenegro alone.

"It's the only route currently open if you want to get from Greece to the other parts of the European Union," Peter Van Der Auweraert, head of mission for the International Organization for Migration, IOM, said, earlier this year.

According to the IOM and the Bosnian authorities, some 24,000 migrants entered Bosnia in 2019, most of them from Afghanistan, Iraq...