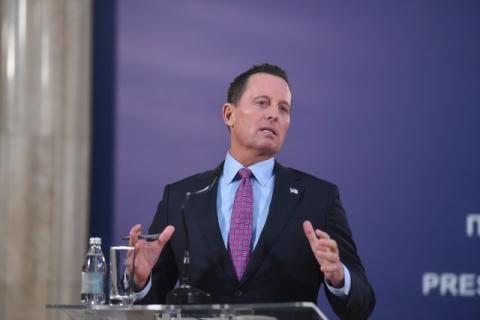 "I am pleased to announce that our highly respected Ambassador to Germany Richard Grenell will become the Acting Director of National Intelligence," the US President Donald Trump tweeted.
The US President thanked Acting Director of Intelligence Joe Maguire, who has been in office since August.
Grenell will be in charge of 17 US intelligence agencies, including the CIA, the FBI, the Military Intelligence Agency, the NSA ...
Appointment as Acting Officer means that Grenell will not have to be confirmed in the Senate, AP reports.
The news of the Grenell election, first reported by the New York Times, comes just before the March 11 deadline to appoint a new intelligence director or a new acting director because under federal law, Maguire cannot remain in office after that date, CNN reports.
Grenell is expected to be in the position for only a couple of months, well-informed sources told CNN. One source told CNN that Grenell would hold the post for about 90 days and he accepted the job being aware of that. Theoretically, Trump could use that time to continue his search for the right director of intelligence agencies.
"This is just a short-lived thing," one source said. Another source states that some Republicans are dissatisfied with his ambassador's work so "there is no way to confirm it" in the Senate.
Still, his appointment allows Trump to immediately appoint a loyal man to the post while coming up with a long-term solution.
Grenell's appointment has received criticism primarily for his inexperience in the intelligence field. Virginia Democrat Senator Mark Warner, a member of the Senate Intelligence Committee, said Trump "selected an individual without any intelligence experience to serve as the leader of the nation's...