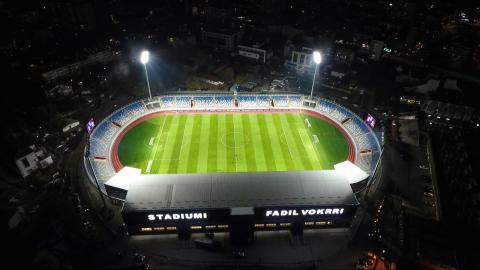 Seventeen-year-old Ilija Ivic, from the mainly Serbian town of Gracanica, near the capital, Pristina, is set to become the first Kosovo Serb footballer on the national team in its under-19 squad, after accepting the invitation.

Ivic received the invitation from the team coach, Ramiz Krasniqi, as it attempts to bounce back from a disastrous campaign to qualify for the UEFA EURO U19 Championship, failing to qualify with only one point in three matches.

"As a coach, I am not at all interested in someone's nation or religion. He is one of the bigger talents. He is an extremely tall player, a very intelligent player and a guy who has shown that we can count on him at games," Krasniqi said in an interview with the Serbian media outlet Danas.

Ivic recently signed his first professional contract with KF Flamurtari, a team that plays in the country's highest tier of footballing competition, the Kosovo Superleague.

He expressed his pride in representing the team's colours, downplaying any issues based on his ethnicity.

"I have been a part of Flamurtari for three years and I feel at home, everyone has accepted me and everything is fine," Ivic told Kosovo outlet Telegrafi. "For me, it is a good feeling because my work and quality have been appreciated, it gives me an even greater push to move on."

Flamurtari's coach, Synaj Keqi, also praised the player's ability. Arbnor Morina, the club's director, said there were no issues in signing him to a professional contract, after mentioning that his father had signed him as a minor years earlier.

"I had no dilemma to sit down and talk about him being a part of Flamurtari," Morina said.

The Kosovo Serb is expected to make his debut this season, having trained with the team in Turkey...