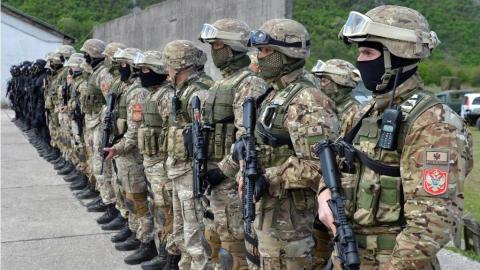 Montenegro Army Chief General Dragutin Dakic has told television Vijesti that any soldiers or officers taking part in recent protests against the new law on religion risked being forced out, as there was no place in the military for those who want to defend the Church from the law.

Since Montenegro's parliament passed the disputed law on December 27, tens of thousands of Serbian Orthodox Church clergy, believers and supporters have been protesting twice-weekly, demanding its withdrawal.

Opposition pro-Russian and pro-Serbian political movements that generally support the Serbian Church are regular participants in the rallies and marches.

But General Dakic warned that soldiers have a duty to defend the state in accordance with the laws and the constitution, and cannot take part in political manifestations.

"It is unacceptable to participate in protests where there are visible political implications, where we can only see the flags of another state … and when Montenegro and Montenegrins are underrated and insulted," Dakic said on Wednesday, referencing the presence of Serbian flags and emblems at the rallies.

On Wednesday, the Serbian daily Vecernje Novosti reported that during an army meeting on February 6, Dakic threatened officers with exclusion from military service if they participated in the protests.

In an interview with the Montenegrin public broadcaster on February 4, President Milo Djukanovic delivered the same warning to members of his ruling Democratic Party of Socialists, DPS, saying those who joined the marches against the religion law risked expulsion from the party.

During a DPS presidency meeting on Wednesday, Djukanovic described the protests against the law as the last political battle ...