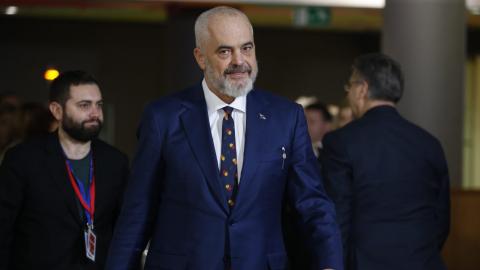 Un-exposed, a hard-hitting TV talk show that featured Albania's four leading journalists, was also shut down after criticizing Rama. A number of other TV talk shows, newspapers, and online platforms critical of Rama are under attack from the government. With little legal recourse, these shows are in the process of shutting down.

Rama's governing Socialist Party has overwhelming control of the government, parliament and judiciary. The opposition walked out of parliament last year over the government's failure to combat corruption. At the same time, the judiciary is in disarray. The government vetting process, introduced to screen out corrupt judges, is also being used to ensure future judges come from Rama's pool of cronies. Consequently, Albania is currently without a functioning Constitutional Court, while many local and national courts remain understaffed.

Rama continues to argue that the proposed media laws are necessary to stop the spread of fake news and disinformation. He also argues that the laws comply with international press freedom standards. Local and international media watchdogs disagree. They warn that the laws will serve to protect the government from the few critical media outlets left in the country.

The proposed media laws would impose exorbitant fines for not announcing and presenting news in "a genuine, impartial, and objective way," as interpreted by a government commission. They would range from $900 to $18,000 US. The average monthly wage in Albania is $463.

As Rama knows from firsthand experience, it is better to fine and tax critical voices out of existence than beat them up, or have them locked them up in the once infamous Spac Prison. Ironically, in 1997, Rama himself was brutally attacked by a gang of...