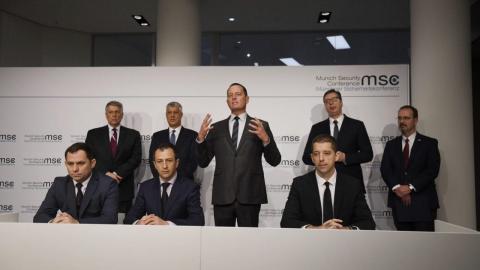 Serbian and Kosovo officials have congratulated Richard Grenell - the US ambassador to Germany and US Special Envoy on the Belgrade-Pristina dialogue - on his new appointment as acting director of National Intelligence in the US, where he will oversee the work of some 17 agencies until a permanent appointment is made.

President Donald Trump appointed Grenell to his Balkan role last autumn, and he has since played a key role in overseeing the resumption of transport links between Serbia and its former province - whose independence it does not recognise.

Grenell spokesperson Dick Custin clarified that his latest promotion did not mean he was stepping back immediately from Balkan affairs. "We can confirm that Ambassador Grenell will be serving as US Ambassador to Germany, Special Presidential Envoy for Serbia and Kosovo Peace Negotiations, and - now - Acting Director of National Intelligence, simultaneously," Custin confirmed to BIRN.

He noted that Grenell would be acting director of National Intelligence for a limited period of time, and that the White House would announce its actual nominee soon.

The director of the Serbian Government's Office for Kosovo, Marko Djuric, said Grenell was making a deservedly important career move. "This appointment is an important step in the ambassador's fruitful career and reaffirms him as a patriot of his country and a professional. Good luck!" Djuric wrote on Twitter.

"A great pick by Donald Trump to appoint Richard Grenell as acting Director of National Intelligence. Ambassador Grenell has done a terrific job as SE [special envoy] on the dialogue between Kosovo & Serbia. I wish you Rick great success in your...