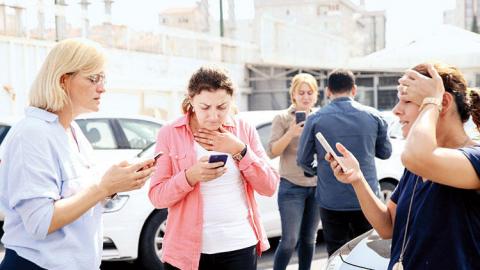 Turkey's telecommunication watchdog BTK has fined the country's three mobile operators, Turkcell, Vodafone and Türk Telekom, over their failure to provide communications services in the wake of the 5.8-magnitude earthquake that struck Istanbul in September.

The BTK's Sectoral Supervision Department had launched an investigation into the disruptions experienced in communication services, during which subscribers failed to establish communication over their phones.

Following the probe, the authority decided to hand fines to the mobile operators on the ground that they had not carried out the necessary work to improve their infrastructures.

Turkcell was slapped with a fine in the tune of 2 million Turkish Liras (around $327,000) for the disruptions which lasted for an hour and 15 minutes in the aftermath of the tremor.

Vodafone received a fine of 2.46 million liras for the one hour and 45 minutes disruption while the authority fined Türk Telekom 5.27 million for up to 27 hours of break in services.

The BTK imposed an additional fine of 4.5 million liras on Türk Telekom for switching off two radio network access elements without approval from the related authorities.

The 5.8-magnitude earthquake caused panic among the residents of Istanbul, the country's largest city by population.

It took place at a depth of 6.99 kilometers in the Marmara Sea off the coast of Istanbul.