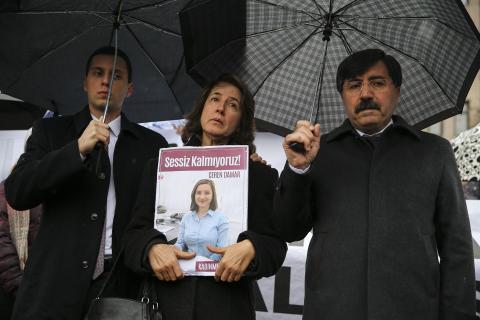 An Ankara court on Feb. 21 reached a verdict in the high-profile case of the murder of 27-year-old research assistant Ceren Damar Şenel.

The 33rd Heavy Penal Court of Ankara convicted suspect Hasan İsmail Hikmet to an aggravated life sentence on charges of "deliberate killing." He was separately given two years in prison for "violating firearm laws" and "threatening with a gun."

Damar was killed on Jan. 2, 2019 at Çankaya University by student Hikmet after she caught him cheating in an exam.

Hikmet first stabbed Damar and then shot her dead with a gun.

Damar, who was initially severely injured, succumbed to her wounds despite efforts by paramedics. The student was detained shortly after.

The police determined that the suspect had used his father's gun, a retired police officer, to shoot the academic.

Hikmet initially told the police that he decided to kill the lecturer after she insisted to launch a disciplinary procedure for cheating. He added that he called his parents after the murder and his father took him to the police center.

According to the women's rights group Kadın Cinayetlerini Durduracağız Platformu (We Will Stop Femicides Platform), which keeps a tally of femicides across the country, 411 women were killed by men in 2019.

With the latest figures, the total number of women killed since the beginning of 2020 equaled 29 already, according to the same group.