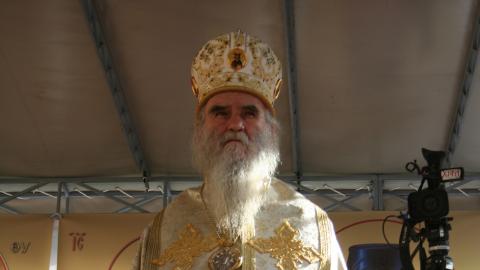 Metropolitan Amfilohije, the Serbian Orthodox Church's most senior bishop in Montenegro, said Defence Minister Predrag Boskovic should return the medal the Church gave him, as he no longer deserved it.

The Church's governing synod awarded Boskovic with its highest decoration, named after Serbia's patron saint, in 2011, mainly for his contribution to the construction of a church in Pljevlja, when he chaired the board of the local coal mine.

He angered the bishop on January 17 when, on the public broadcaster, he accused the Church of using the protests against the new law on religion to negate Montenegrin identity and undermine Montenegro as an independent state.

He accused the Church of effectively wanting to be above and outside the law, and above the state of Montenegro.

On Wednesday, Army Chief General Dragutin Dakic told television station Vijesti that any soldiers or officers taking part in recent protests against the new law risked being forced out, as there was no place in the military for those who want to defend the Church from the law.

Montenegro has been in turmoil over the law ever since parliament passed it on December 27.

The dispute centres on the law's call for the...