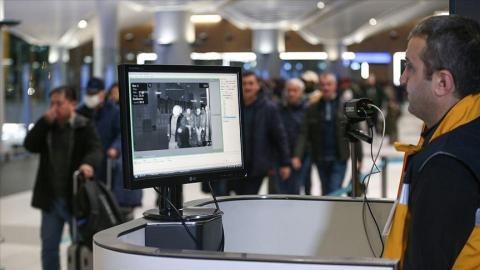 Turkey has started to screen travelers arriving from Iran at border gates and is refusing entry to anyone with signs of illness after four people died from the new virus that emerged in China, along with 750 suspected cases.

Health Minister Fahrettin Koca on Feb. 21 said that Turkey is subjecting all arrivals from Iran to medical checks. He also said that Iranians who have traveled to Qom in the past 14 days will be refused entry.

Earlier this month, Turkey sent an A400M-type military cargo planet to Wuhan - the epicenter of the virus - and evacuated a total of 42 people, including 32 Turkish nationals, six Azerbaijanis, three Georgians, and an Albanian.

There is currently no known case of coronavirus in Turkey.

Iranian health authorities on Feb. 21 reported two more deaths from the coronavirus and said the fatalities were from among 13 new confirmed cases of the virus in Iran.

The report by the semiofficial Mehr news agency came as Iranians voted in nationwide parliamentary elections.

After authorities reported two earlier deaths this week, the death toll from COVID-19, the illness caused by virus, stands at four in Iran.

So far, 18 cases have been confirmed in Iran, including the four who died.

Addressing a news conference, Hassan said the patient was taken directly to isolation from a plane arriving from the Iranian city of Qom on Feb. 20 after exhibiting symptoms of the virus.