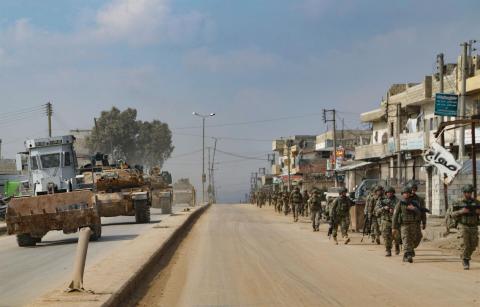 At least 15 Turkish soldiers have been killed in Syria this month amid a crushing offensive by Bashar Assad's forces aimed at recapturing remaining opposition-held areas in the region.

Intent on halting the advance, Turkish President Recep Tayyip Erdoğan had vowed Feb. 12 to take military action "everywhere in Syria" if another Turkish soldier was killed or wounded.

The multiple front offensive has triggered the biggest single wave of fleeing civilians in Syria's nine-year war, displacing nearly 1 million people who have rushed toward the Turkish border and are sheltering in tents or sleeping rough in harsh winter weather.

It has also risked completely shattering a fragile cooperation between Ankara and Moscow, which back opposing sides of the Syria war.

Ankara has sent thousands of soldiers to northwestern Syria to try to stem the Syrian regime's advance on the province near the Turkish border, leading to the repeated flare-ups.

Feb. 20's exchange marked a serious escalation that risks growing into a full-blown conflict between Turkey and Syria. Erdoğan has also called on Assad's forces to retreat from Idlib or face an "imminent" Turkish attack.

The Russian military said their actions "were supported by Turkish artillery fire," which allowed them to break through the Syrian regime's defenses. Four Syrian soldiers...