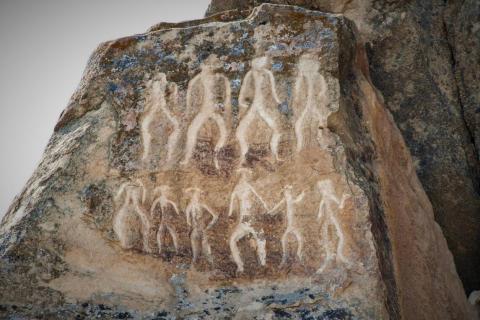 Gobustan Rock Art Cultural Landscape in Azerbaijan is a bridge connecting the past and modern ages, a reserve official said in an interview.

"Same as Azerbaijan stands as an economic, cultural and historical bridge between Europe and Asia, Gobustan also stands as a bridge between ancient and modern times," said Fikrat Abdullayev, deputy director of the reserve.

Gobustan, a hill and mountain site occupying the southeast end of the Greater Caucasus mountain ridge, is about 65 kilometers (40 miles) southwest of the capital, Baku, on the western shores of the Caspian Sea.

Abdullayev said Gobustan -- hosting rock art engravings depicting images of hunting, fauna, flora and lifestyles in pre-historic times -- was declared a national historical landmark of Azerbaijan in 1966 aiming to preserve the ancient carvings, relics, mud volcanoes and gas-stones in the region, and pass them to the future generations.

He noted that in 2007 Gobustan was declared a UNESCO World Heritage Site at the World Heritage Committee's 31st session held in Christchurch, New Zealand.

The UNESCO World Heritage Center said Gobustan is "an outstanding collection of more than 6,000 rock engravings bearing testimony to 40,000 years of rock art.

"The site also features the remains of inhabited caves, settlements and burials, all reflecting an intensive human use by the inhabitants of the area during the wet period that followed the last Ice Age, from the Upper Paleolithic to the Middle Ages," according to UNESCO.

UNESCO also refers to Gobustan as having "outstanding universal value for the quality and density of its rock art engravings."

In 2019, rock images of the preserve were included in the Islamic World Heritage List in the extraordinary...