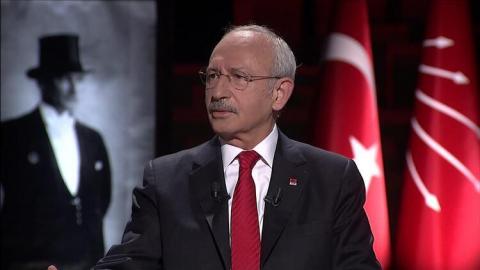 Turkey's main opposition Republican People's Party (CHP) leader Kemal Kılıçdaroğlu has said he does not expect early elections would be called, because "no such decision will be made in parliament" due to the "one-man rule."

"There is one person who will decide on early elections. That person is [President Recep Tayyip] Erdoğan… 'Parliament will sit down and decide to hold an early election?' No, this is pure imagination," Kılıçdaroğlu told daily Cumhuriyet in an interview published on Feb. 24.

Kılıçdaroğlu said it is not possible for parliament to rule for early polls because there is a majority of ruling Justice and Development Party (AKP) and Nationalist Movement Party (MHP) seats.

"They say 'yes' to whatever Erdoğan says," he said.

He added that parliament will decide to go for an early election only if the president says so.

"Parliament has turned into a weakened institution with the one-man regime," he said.

Kılıçdaroğlu said that parliament turned into an institution "managed only by one person's words."

"The Veteran Parliament turned into one which a single person dominates, from one that managed the National War for Independence," he said.

Referring to Turkey's current situation, Kılıçdaroğlu said that a fundamental problem of the country is "democracy."
"No country without a deeply-rooted democracy has seen growth or development," he said.

The CHP leader said that the second most important problem is "education."

"Education will make a society increase its rank. But [now] there is a public which retrogresses with education," he added.

Also addressing Turkey's economic troubles, Kılıçdaroğlu conveyed that his party has been in an effort to reach out to more citizens with...