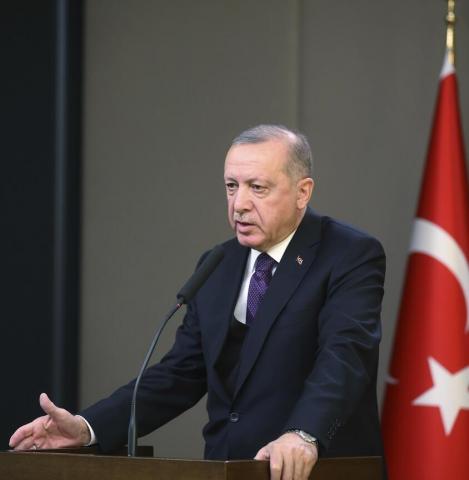 Turkish President Recep Tayyip Erdoğan on Feb. 25 announced that a Russian delegation would arrive the following day to resume talks aimed at easing tensions in northwestern Syria. He also said no consensus was reached for a four-way meeting next month between the leaders of France, German, Russia and Turkey.

At a news conference in capital Ankara before departing on a trip to Azerbaijan, Erdoğan said that a Russian delegation was set to come to Turkey on Feb. 26 to discuss the Idlib situation. Turkish officials had reported small progress in two previous rounds of Turkey-Russia meetings but said the results were not satisfactory.

"There is no full agreement yet between [French President Emmanuel] Macron...[German Chancellor Angela] Merkel, and Putin," he said. Macron and Merkel have both urged Putin to end the conflict, concerned about the humanitarian situation.

On Feb. 22, Erdoğan said that Turkey had set out a "road map" for Syria after calls with the three leaders, while the Kremlin has said it was discussing the possibility of holding a four-way summit.

The president also said that he and his Russian counterpart Vladimir Putin may still come to Turkey next week for a bilateral meeting. The Kremlin said on Feb. 25 that it was working to organize a summit with Turkey and Iran for Idlib, but was not organizing a separate mooted four-way summit that would gather France, Germany, Turkey, and Russia.

"There is a process underway between Turkey and Russia regarding Idlib and Libya. We need to quickly resolve the Idlib issue. Russia provides the regime with the highest level of support, including air support. We have determined it despite their denial. With our 911-kilometer...