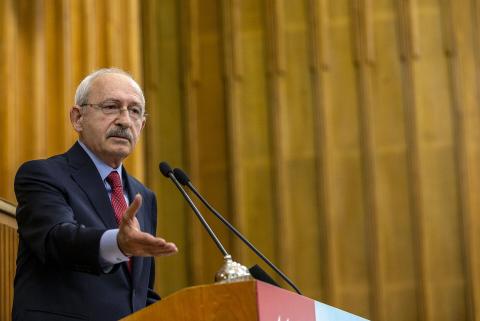 "We know that justice has experienced many great losses in the last 18 years. We know that there is a loss of trust. As the head of Supreme Court or the Constitutional Court, they will say the same thing," Kılıçdaorğlu said at a parliamentary group meeting of his party in the capital Ankara.

"Justice should have been an institution where we would apply to in case of unjustness," he said.

Referring to a recent joint communique signed by 25 bar associations in Turkey, Kılıçdaroğlu said Turkey is experiencing "the gravest judiciary crisis of its history."

"The foundation of the state is justice."

The CHP leader also criticized the arrest of businessman Osman Kavala, who was re-arrested as part of a probe into the defeated coup attempt of 2016, after he was acquitted from the Gezi Park trial.

"Is this right or just? This does not have a political dimension, it is a humanitarian and moral issue," Kılıçdaroğlu said.
"A person with the right mind should object to this," he added.

After Kavala's acquittal, the Board of Judges and Prosecutors (HSK) launched an investigation against the judges who ruled for the acquittal.

"How can we say 'Justice exists in this country' in the midst of all this. The HSK has become political with its current structure," Kılıçdaorğlu said.

"The Constitution is in abeyance. They do not want anyone to even breathe," he added.

Kılıçdaroğlu also slammed the government over its foreign policy, especially in the...