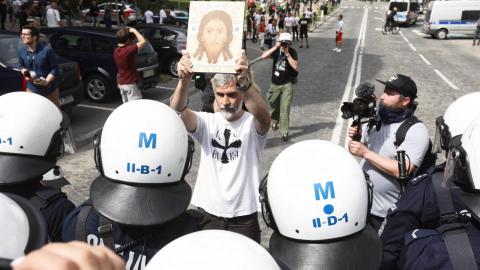 According to an "Atlas of Hate" map created by activists, an area greater than the size of Hungary has effectively become an "LGBT-free zone" in the heart of Central Europe. Campaigners and international bodies including the European Parliament have condemned the resolutions, saying they are discriminatory and undermine LGBT rights.

The almost 100 municipalities that have adopted the resolutions include five voivodships (the largest administrative unit in Poland) in the southeast of the country, as well as dozens of counties and other smaller units, data from official sources collected by an informal collective of human rights activists shows.

A sixth voivodship was due to vote on a resolution on Monday, but the vote was postponed to allow for more debate in committees.

The non-binding resolutions, which municipalities started adopting in early 2019, coincide with a rise in rhetoric by the governing Law and Justice party (PiS) denouncing "LGBT ideology" as an allegedly foreign import threatening the Polish nation and its age-old Christian values.

PiS leader Jaroslaw Kaczynski has famously warned, "Hands off our children!" — implying that "LGBT ideology" threatens the morality and health of young Poles. Meanwhile, defence of supposedly Christian principles is a key PiS promise to its electorate.

Ironically, analysis shows that resolutions aimed at protecting supposedly home-grown Polish values stem at least in part from cooperation with international conservative groups, whose increasing levels of coordination were revealed in a 2018 BIRN investigation.