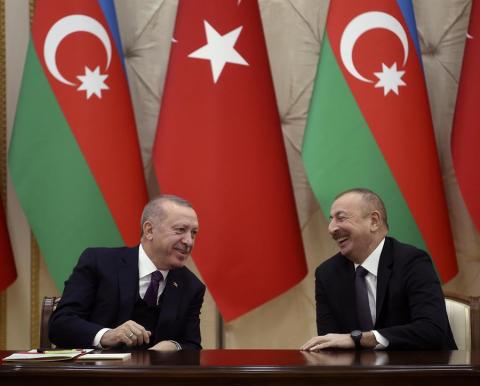 Turkish President Recep Tayyip Erdoğan said on Feb. 25 the Upper Karabakh is as much Turkey's issue as it is Azerbaijan's.

"It is our greatest desire to resolve the problem of Upper Karabakh on the basis of Azerbaijan's sovereignty and territorial integrity," Erdoğan said at a joint news conference with his Azerbaijani counterpart Ilham Aliyev.

He said the railway connecting Turkey to Azerbaijan's autonomous region of Nakhchivan, which is surrounded on the east and north with rival Armenia, bears great strategic importance.

Praising the brotherly ties between the two countries, Erdoğan said: "We will boost the trade volume [with Azerbaijan] to $15 billion in 2023, this is our aim."

Last year, the trade volume of the two countries was $2 billion.

The Turkish president's remarks came after the eighth edition of the High-Level Strategic Cooperation Council meeting -- which was established in 2010 to enhance ties at the presidential level.

Erdoğan thanked the people and government of Azerbaijan for their support to Turkey after a powerful earthquake hit the country's east in January.

He also stressed that Azerbaijan was the country that supported Turkey most in the fight against FETÖ, the group behind the 2016 defeated coup.

Recalling the Khojaly genocide, of which on Feb. 26 will mark the anniversary on 28 years, was one of the most brutal genocide in the 20th century, said Erdoğan.