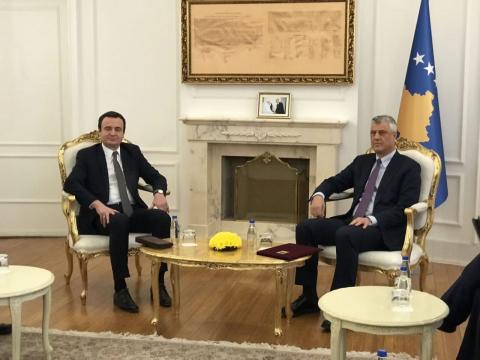 The new Prime Minister of Kosovo says clear grounds exist to sack President Hashim Thaci, for having violated the constitution by signing a secret agreement with NATO limiting the powers of the security forces when he was prime minister.

"There exists sufficient evidence to conclude prima facie that President Thaci, the then prime minister, committed serious violations of the Constitution of Kosovo and that such violations justify the initiation of a constitutional procedure to remove him from the position of President," his office said in a letter to the speaker.

Kurt said this related to an exchange of letters on April 19, 2013 between the then prime minister and the then Secretary General of NATO, Anders Fogh Rasmussen.

Kurti said the agreement gave the alliance's peacekeeping mission in Kosovo, KFOR, veto powers over any planned actions by the Kosovo Security Forces, KSF, in the Serb-held north of the country.

According to him, the agreement was signed on the same day in 2013 as another one dealing with the formation of an association of Serb-majority municipalities. Kurti says it was kept hidden until now.

The alleged agreement went against Article 4 of the law on the KSF, which parliament adopted in 2018, and which gave the KSF the task of "protection of the sovereignty and territorial integrity of the Republic of Kosovo".

Kurti claimed that Thaci's letter, which he says he obtained from "NATO sources", contains assurances that the KSF would only undertake missions in the north "with prior concurrence" from KFOR, which might beforehand consult representatives of the local community in northern Kosovo.

Kurti said in his letter, sent to speaker Vjosa Osmani, that it was the secretive nature of the agreement rather than...