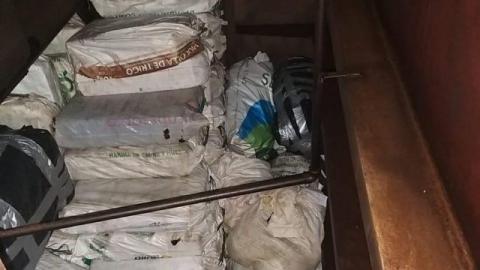 Montenegro's Police Directorate on Wednesday said that the arrest was part of a months-long international action initiated by Montenegrin, Serbian, Dutch and British law enforcement.

"The arrested Montenegrin nationals were the crew members. It is suspected that the ship carrying cocaine was to have smuggled it to a port in Western Europe," police said.

The cargo ship, Aressa, sailed from Suriname in early February, docked at Guaranao in Venezuela and was heading for Thessaloniki in Greece.

Montenegrin media reported that the ship was sailing under the Cameroonian flag when it was intercepted in international waters off Colombia's neighbour, Venezuela.

The seizure came after North Macedonian police on February 20 seized a kilo of cocaine that had entered the country, also as part of a wider international drug-busting operation.

The seized cocaine had entered North Macedonia from neighbouring Albania and been transported in a truck driven by a Montenegrin driver.

The police in the country followed the truck from its entry and made the bust at the storage facility of a local fruit company in the village of Krushopek, near the capital, Skopje, which was its final destination.

After finding the cocaine hidden among packages of bananas, police apprehended the owner of the fruit company, two employees as well as the Montenegrin truck driver.

Regional media outlets suggested the drug-busting operation had been likely coordinated between the US Drug Enforcement Administration, DEA,...