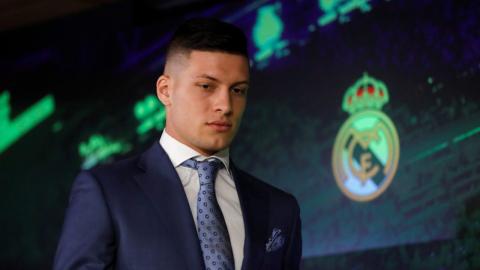 Media reports say the manager of Serbian Real Madrid football player Luka Jovic, and his associates, have been charged with money laundering and offences against the public purse in Spain.

Abdilgafar Fali Ramadani, the German-born Macedonian manager of Jovic, oversaw his transfer from Eintracht Frankfurt to Real Madrid for 60 million euros in 2019.

Spanish magazine As said Ramadani is a director of Lian Sports, an agency he founded with Nikola Damnjanac, a football manager and former player for top Serbian club Partizan.

The Lian Sports website says the agency has "concentrated its activities in the Balkan countries, acquiring highly skilled talents".

"The company has then expanded its sector on to the worldwide market with football players, clubs and all other leading participants in the football market on a global platform," the website adds.

As said Ramadani had focused on acquiring Serbian, Croatian, Bosnian and Montenegrin talent,  and that in recent years he was closely linked with moves to Fiorentina.

The agency has a secretive image, AS wrote. "They are keen to remain out of the spotlight and always in the shadow," it wrote in April 2019, ahead of Jovic's transfer to Real Madrid.

But now Spanish investigators want to see the documentation on various signings at 11 Spanish clubs, mostly concerning players from Serbia and other former Yugoslav countries.

They want to see the documentation at Real Madrid on Jovic's contract; at Atlético de Madrid concerning Stefan Savic (from Montenegro) and Nikola Kalinic (from Croatia); at Sevilla on the contract for Stefan Jovetic (Montenegro); at Almería, on Ante Coric (Croatia); at Sporting de Gijón, on Stefan Scepovic (Serbia); at Real...