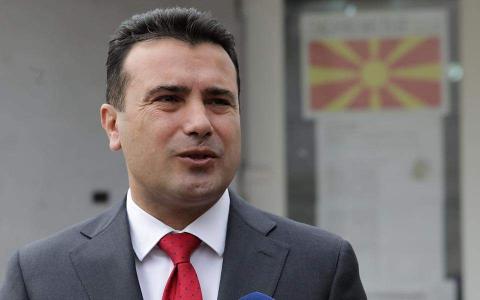 Thousands of opposition supporters marched peacefully through North Macedonia's capital Skopje late Tuesday to protest what they claim was interference in the judiciary by the country's former prime minister.
The protest to the Supreme Court building was organized by the conservative main opposition VMRO-DPMNE party amid campaigning for early parliamentary elections on April 12.
The party has called for a judicial investigation into alleged abuse of power by Zoran Zaev, the center-left prime minister who stepped down last month in preparation for the elections.
The opposition's demand followed the release of an audio recording of a conversation in which Zaev, while serving as prime minister, allegedly implied that he had prior knowledge of what a prosecutor would recommend in a politically sensitive case. VMRO-DPMNE said it got the recording form a whistle-blower.

The diplomat behind the poet