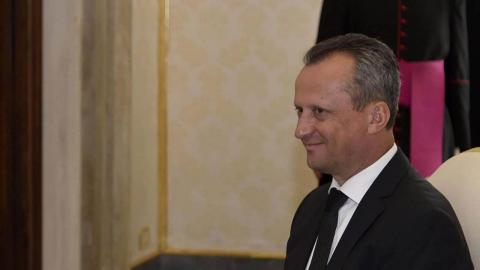 The trial has started in Skopje of those charged with organising a mob assault on parliament in North Macedonia in April 2017, aimed at preventing the then opposition Social Democrats from taking power.

After hearing the charges, all four of the accused, including the former speaker Trajko Veljanoski, pleaded not guilty. "This is classic political persecution. I absolutely do not feel guilty," Veljanoski said.

They are charged with taking a leading part in an organised attack on the legislature that injured more than 100 people, including journalists and opposition MPs. Veljanoski, who served as speaker from 2008 until 2017, is the first speaker of parliament in the country to face a trial.

However, the court decided that they will not face trial because they are not in the country. Gruevski fled to Hungary to avoid serving a prison sentence for corruption in October 2018. He was later granted asylum there.

Boskovski fled to Greece in July 2017 and has since obtained asylum there. He fled after a court ordered his arrest in relation to the high-profile illegal wiretapping affair, linked to the Gruevski government. The trial in this case, named "Target-Fortress", is ongoing.