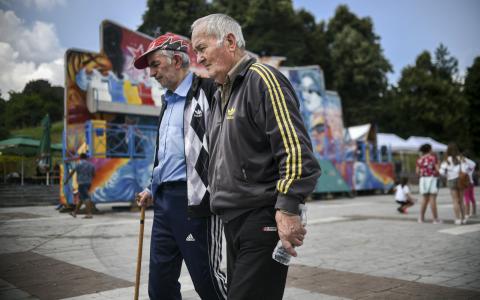 Ogynyan Nenchev has spent the last 15 years trying to escape Vidin, a province in the north-western tip of Bulgaria. Six times he went in search of a better life, six times he came back. His decision to keep returning to the poorest corner of the poorest country of the European Union was unusual. His desire to leave was not. A steady exodus of working-age adults has helped nearly halve Vidin's population over the last 35 years - from 162,000 in 1985 to around 85,000 in 2018.

Ognyan began leaving in search of work in his late forties, after losing his job as an animal-health inspector in Vidin city, the capital of the province that shares its name. Unlike the millions of Bulgarians who went to western Europe, he confined his quest to his country. Sometimes he found work as a veterinary doctor, on the basis of his original qualification. Sometimes he was hired as a science teacher or heating engineer on the basis of additional qualifications. He returned to Vidin whenever the work ran out, with the same feeling every time: dread. "It was as if I were coming back to my grave," he said. "This is a dying city."

Vidin is in a death spiral in which a stagnating economy and demographic decline have been circling each other. People have been leaving the province in search of prosperity, and prosperity has eluded the province because so many people have left. While a similar dynamic is in play across much of Eastern Europe, its impact in Vidin has been dramatic. The population of the province has declined at the fastest rate in Bulgaria, which itself has the fastest declining population in the EU, and indeed, the world. Vidin can reasonably claim to be the world capital of population decline - the ground zero of demographic collapse.

An outlier in the...