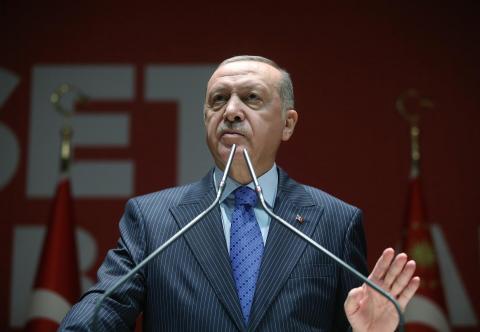 The latest situation in Syria's northwestern province of Idlib is in Turkey's favor, President Recep Tayyip Erdoğan said on Feb. 27, referring to advance of rebels into Saraqeb town near Aleppo.

"The developments in Idlib are now in favor [of Turkey]," he said speaking at a ceremony of the ruling Justice and Development Party (AKP).

Three Turkish soldiers have been killed recently in regime attacks, but "besides that, the loss of regime forces is huge," the president stated.

The fighting in Idlib is still ongoing, he said, adding that Turkey and Russia continue negotiations in the meanwhile.

Erdoğan noted that Turkish troops are present in Idlib upon the Adana agreement between Ankara and Damascus signed decades ago.

Responding to the opposition parties' criticisms for Turkish troops' presence in Syria, Erdoğan said Turkey has a 911-kilometer-long land border with the neighboring country and has to take measures for its national security.

In reply to calls from the main opposition Republican People's Party (CHP) for establishing a dialogue with Syria's Bashar al-Assad, Erdoğan said "He [CHP leader] offers to have talks with al-Assad. I was meeting him when even you did not know him. I know his character."

He criticized the Turkish opposition parties for "not seeing what a murderer Assad is, killing even his own people."

Erdoğan earlier said Syrian regime forces must withdraw from the area that was designated as a de-escalation zone in Idlib until the end of February, signaling a new military operation if the threat against Turkey's military posts in the area continues.

Turkey-backed Syrian opposition stepped up to retake Saraqeb town which is...

Unlike the coronavirus, Turkey is here to stay
IntMin Vela announces suspension of flights to and from the US and some European countries