Gunman kills 5 at Milwaukee brewery before taking own life 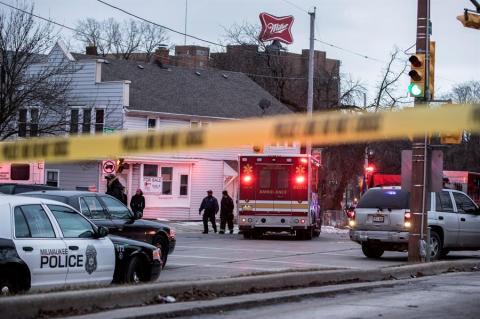 An employee opened fire on Feb. 26 at one of the nation's largest breweries in Milwaukee in the United States, killing five fellow workers before taking his own life, police said.

The assailant who attacked the Molson Coors complex was identified as a 51-year-old Milwaukee man who died of a self-inflicted gunshot wound, police said.

"There were five individuals who went to work today, just like everybody goes to work, and they thought they were going to go to work, finish their day and return to their families. They didn't and tragically they never will,'' Milwaukee Mayor Tom Barrett said.

Authorities offered no immediate motive for the attack and did not release details about the shooter or how the shooting unfolded.
None of the victims was identified. Police, who were still contacting relatives, said identities would not be released for at least 24 hours. No one was wounded beyond those who were killed, authorities said.

Officers worked for hours to clear the more than 20 buildings in the complex where more than 1,000 people work. Police announced at a late evening news conference that the work was done and all employees had been allowed to go home. Police Chief Alfonso Morales said authorities believe the shooter acted alone.

President Donald Trump addressed the shooting before speaking at the White House about his administration's efforts to combat the coronavirus.

The attack occurred at a sprawling complex that includes a mix of corporate offices and brewing facilities. The complex is widely known in the Milwaukee area as "Miller Valley," a...