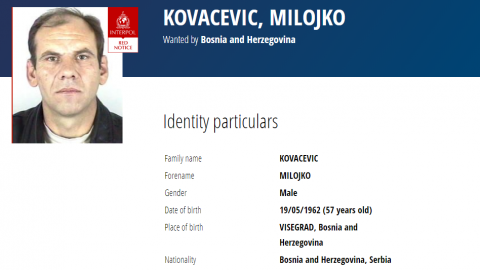 A 'red notice' has been posted on Interpol's online wanted list calling on countries worldwide to arrest Milojko Kovacevic, who is accused of the forcibly removing, torturing, abusing and beating Bosniak civilians from the village of Donje Veletovo in the Visegrad area of eastern Bosnia in June 1992.

The Bosnian prosecution charged Kovacevic with crimes against humanity in February 2019, but Bosnian police have not  been able to arrest him because he is no longer in the country.

The prosecution said Kovacevic, who was born in Visegrad, now lives in the Uzice area in neighbouring Serbia.

When the indictment was raised last year, the prosecution said that Kovacevic participated "in the forced resettlement of the Bosniak civilian population from the village of Donje Veletovo in June 1992, when the entire population was forcibly transported towards the Sokolac municipality".

It said that women, children and the elderly were then "expelled to territory controlled by the Bosnian Army, while around 50 Bosniak men were escorted by armed members of the Bosnian Serb Army and police to the Paklenik pit locality, where they were killed".

Kovacevic is accused of committing the crime as a member of reservist police forces at the Public Security Station in Visegrad.

The Bosnian state court told BIRN last month that it was seeking a total of 47 people for arrest who have been indicted for wartime crimes.