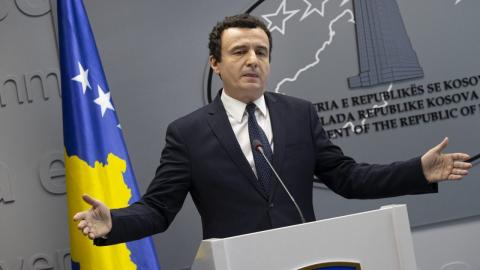 Kosovo politicians continued to trade accusations on Wednesday over a reported secret agreement in 2013 with NATO, which imposed limits on the security forces' freedom of action, especially in the Serb-dominated north.

Former prime minister Ramush Haradinaj on Wednesday insisted he had observed no such limits when he headed the government, saying the Kosovo Security Force, KSF, had "a full mandate throughout the entire territory of Kosovo, with no limitations".

Haradinaj's claim was in response to a letter sent by new Prime Minister, Albin Kurti, to the speaker that detailed a "secret agreement" allegedly made in April 2013 by then prime minister Hashim Thaci, now the President of Kosovo, to the then NATO General Secretary, Anders Fogh Rasmussen.

The agreement gave assurances that the KSF "would only undertake a mission in northern Kosovo with prior concurrence from KFOR".

Kurti told Speaker Vjosa Osmani on Wednesday that Thaci had breached his constitutional duties by secretly agreeing to limits on Kosovo sovereignty - and that grounds now existed to dismiss him from the presidency.

However, a NATO official told BIRN that, irrespective of any such secret agreement made in 2013, the KSF would already have to inform the NATO peacemaking force, KFOR, of any planned actions in the north of Kosovo based on a 1999 UN resolution.

According to Haradinaj, a law on the KSF passed by Kosovo in December 2018 extended the competencies of...