A mob out for blood: India's protests pit Hindus against Muslims 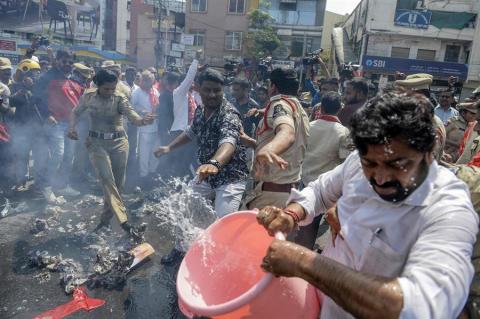 Mohammad Zubair was on his way home from a local mosque in northeast New Delhi when he came across a large crowd. He turned towards an underpass to avoid the commotion; it proved to be a mistake.

Within seconds, he was cowering on the ground surrounded by more than a dozen young men, who began beating him with wooden sticks and metal rods. Blood flowed from his head, spattering his clothes. The blows intensified. He thought he would die.

Zubair provided his version of events at a relative's home in another part of the capital, his head wrapped in bandages.

The mid-afternoon attack on Feb. 24, captured in a dramatic Reuters photograph, came against a backdrop of tension and violence.

Near the area of the Indian capital where it occurred, Muslim and Hindu protesters had been fighting pitched battles for hours across a concrete and metal barrier that divided the main thoroughfare, throwing rocks and primitive petrol bombs.

But the sight of a mob screaming pro-Hindu slogans suddenly turning on an unarmed individual, apparently because he was a Muslim, was a sign that growing tensions between members of India's two dominant religions may be hard to contain.

Unrest across India began in December with the passing of a law that makes non-Muslims from some neighboring nations eligible for fast-tracked citizenship - a move many Muslims say is discriminatory and marks a break from India's secular traditions.

Persecuted religious minorities including from Hindu, Sikh, or Christian communities are eligible for citizenship, but those from Islam do not enjoy all the same advantages.

India's 1.3 billion locked down as US reaches virus aid deal

Today is the National Vaccination Day

Indian couple tie the knots in $1.1 million ceremony in Antalya