Police officers hurt in clashes over migrant camps in Greece 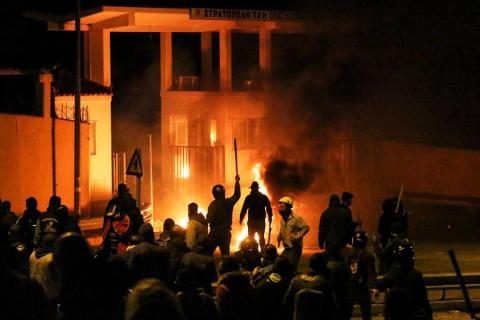 Dozens of policemen deployed to two eastern Greek islands to quell protests over planned new migrant detention centers have been injured during two days of clashes with local residents, authorities said on Feb. 26.

Greece's Aegean Sea islands are a main entry point for migrants seeking better lives in the European Union. Managing the flow of people and growing discontent among Greek islanders has become a challenge for the center-right government in Athens.

Police said 43 officers were hurt on Lesbos, which sees the most arrivals as migrants cross the sea from nearby Turkey. Another 11 officers had injuries on Chios, where an angry mob burst into a hotel used by riot police, beat up officers in their rooms and threw out their belongings.

Twelve people were arrested on suspicion of involvement in the attack, police said. Police gave no information on injuries among protesters.

Lesbos, and to a lesser extent Chios, annually receive tens of thousands of people fleeing war or poverty in the Middle East, Asia and Africa. The migrants cross from the nearby Turkish coast in small, unseaworthy boats provided by smuggling gangs.

Under a 2016 deal between the European Union and Turkey, migrants reaching the islands must stay there until their asylum requests are processed and if these are rejected they must be taken back by Turkey.

But delays in the asylum process, coupled with increased migrant flows, placed massive strains on the system and led to a sharp deterioration of living conditions in existing camps whose...