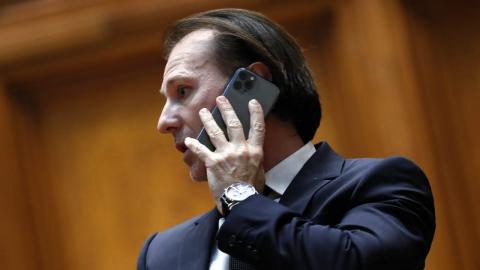 The doomed-looking move was widely seen as a way for the head of state to trigger snap parliamentary elections.

Romanian law requires parliament to reject two consecutive presidential proposals for prime minister before it can be dissolved before the end of its term. Parliamentary elections are due in December.

Citu is part of Ludovic Orban's centre-right minority government, which remains in office on an interim basis after being ousted on 5 February through a no-confidence vote initiated by the opposition Social Democratic Party, PSD.

The PSD and some of the other parties that voted in parliament to unseat Orban have announced that they won't support Citu when he seeks the endorsement of parliament in the next few days.

Citu is the least popular National Liberal Party minister in Orban's government in the eyes of the opposition. He was in charge of reining in the debt left by former PSD governments and has compared them to the notorious US gangster Al Capone, while also accusing them of lying about the budget.

His choice as prime minister-designate came days after the Constitutional Court blocked the earlier nomination of Orban, following an appeal filed by the PSD.

The PSD, which has the biggest number of seats in parliament, argued that Iohannis should not try to engineer the dissolution of parliament by putting forward a figure who was unacceptable to the majority.

The judges upheld this view, ruling that Iohannis could not propose the same prime minister that had just lost the support of parliament, and telling...