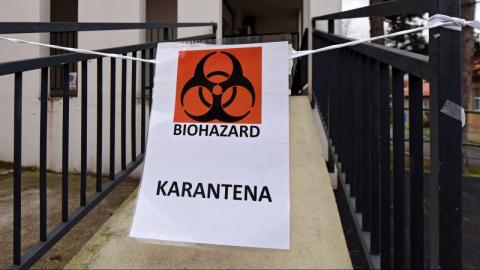 Serbia has no confirmed cases of coronavirus yet, but on Tuesday a WhatsApp voice message began doing the rounds on social media claiming several people had already died from the virus in the capital, Belgrade.

"Doctors are strictly forbidden to talk about the virus," the woman is heard saying on the message, which was published on several Serbian news portals.

A similar thing happened in neighbouring Croatia, where another WhatsApp message contained the claim that the first case had been recorded in the coastal city of Split, before authorities actually confirmed the first case in the capital, Zagreb, on February 25.

With its epicentre in Italy, Europe is grappling to contain the spread of Covid-19. In the Balkans, cases have been confirmed in Croatia, North Macedonia and Romania.

Governments and concerned experts and citizens in the region and elsewhere are taking to the Internet, social media and mobile phone messages to spread information.

But likewise they face what Italy's foreign minister, Luigi Di Maio, has called an "infodemic" of false information and scaremongering in the media and online.

In Serbia, the interior ministry said on Wednesday that its Department of High-Tech Crime was trying to identify the women who made the WhatsApp recording claiming that coronavirus had already claimed its first victims in the country.

In Albania, prosecutors on February 24 announced investigations into what they called the "diffusion of fake information or announcements in any form aimed at creating a state of insecurity and panic among the people."

Scientist: Behaviour 'not in line with magnitude of danger'

Vucic: Dozens of soldiers from the 1st Brigade infected; Tough night passed by VIDEO
Secretary of state Arafat: It's possible next week to prolong emergency state by another month
IntMin Vela announces suspension of flights to and from the US and some European countries