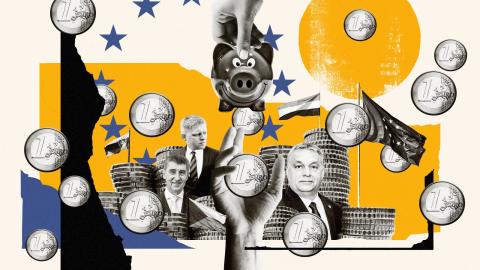 Call it the "subsidy paradox": EU cash meant to encourage development ends up misused by populist governments whose very existence undermines the bloc's cherished values. Worse, it gives them stamina and strength.

"EU funds help sustain national autocracies," R. Daniel Kelemen, a political scientist at Rutgers University, wrote in a recent paper. "Autocratic rulers can use their control over the distribution of EU funding to help prop up their regimes."

As member states lock horns over the EU's next long-term budget, BIRN analysis shows the extent to which EU funds and subsidies bolster illiberal regimes in three countries of Central Europe.

Critics say it is a tale of greed, influence and democratic backsliding, with a cast of characters at the pinnacle of power: Czech Prime Minister Andrej Babis; Robert Fico, head of Slovakia's ruling SMER-SD party; and Hungarian strongman Viktor Orban.

"Without EU funds, Babis would not be prime minister," said Lukas Wagenknecht, a senator for the anti-establishment Czech Pirate Party, who formerly worked as Babis's deputy during the tycoon's stint as finance minister in 2014-2017.

"The money drives the whole system," Mesterhazy said. "Two-thirds of GDP growth comes from EU funds. Pull that money, and Fidesz would collapse."

In Slovakia, meanwhile, revelations from an investigation into the murder of journalist Jan Kuciak in 2018 hint at the workings of a "mafia state" for which EU funds are just another prize to plunder.