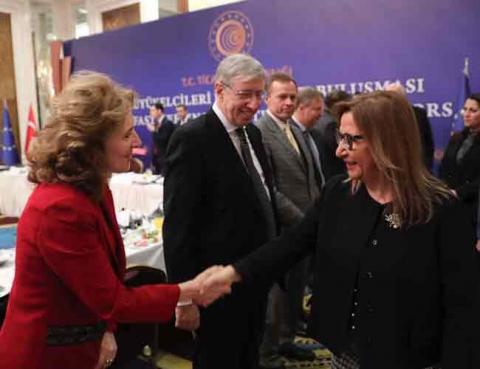 Turkish Trade Minister Ruhsar Pekcan has told the ambassadors of EU countries in Ankara that Turkey is waiting for the European Commission to renew the 1996 customs union agreement.

"Your contributions in this sense are exceptionally important. We invite you to work with the business world," she said at a meeting with the EU Delegation to Turkey on Feb. 26.

Recalling that uncertainties caused by Brexit, regional instabilities and trade wars affect the global economy, Pekcan said: "We believe that under the conditions the global economy is going through, deepening and integrating the trade and economy relations between the EU and Turkey has utmost importance, and that would be necessary for the benefits of the both sides."

The current customs union agreement between Turkey and the EU is outdated and unfit to the potential the European bloc and the Turkish economy, she added.

On his part, Head of the EU delegation to Turkey Ambassador Christian Berger said that many Turkish businesses are well integrated to the EU.

"The figures of the trade between Turkey and the EU are impressive. In 2019, Turkey had surplus in trade with the EU," he said, adding that European investors are highly interested in opportunities in Turkey.

Some 67 percent of the overall foreign investments in Turkey come from the EU countries, Berger recalled.

Turkey has been pushing for upgrading the customs union deal which came into force on in December 1995.

The deal covers all industrial goods but does not address agriculture (apart from processed agricultural products), services or public procurement.