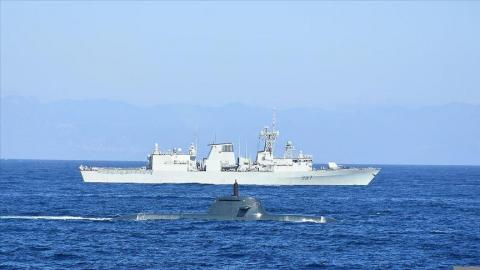 One of the Turkish Navy's most critical striking forces, the TCG Salihreis frigate, will take part in a NATO drill aiming to boost cooperation between allied countries.

The Dynamic Manta 2020 drill - an annual advanced anti-surface and anti-submarine warfare exercise - kicked off on Feb. 24 off Italy's Sicily Island and will continue through March 6.

TGC Sahilreis completed preparations at the Port of Catania prior to the exercise.

He noted that the exercise hosted by Italy aims to implement and test aerial, surface and submarine cooperation methods against submarine threats in the Ionian Sea and Central Mediterranean.

"Turkey will join the Dynamic Manta 2020 drill with S70 helicopter-deployed frigate TCG Salihreis, a submarine - the TCG March 18, a maritime patrol aircraft and four personnel to work at the drill headquarters," Doğukanlı said.

He said the exercise would include intense submarine warfare training and a total of 45 submarine defense warfare session.

Along with Turkey, the U.S., Spain, France, Germany, Canada, England, Italy and Greece are participating in the drill.

"In addition to the activities carried out at high pace in the surrounding seas, the Turkish Naval Forces also fulfills its responsibilities under the NATO alliance with great devotion," Doğukanlı asserted.

Stressing that Turkey was making the maximum contribution to the drill, he said: "Turkey is the second country - among 29 NATO members - which provides the...