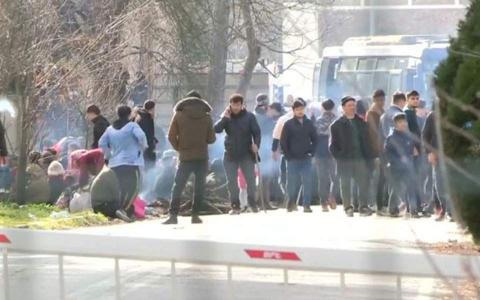 Guards on Greece's northeastern land border with Turkey made "deterrent use" of tear gas to disperse some 500 refugees and migrants trying to enter the country and the European Union after Ankara loosened controls on migrant flows.

Turkish border guards "have disappeared since this morning," the mayor of the Greek border town of Orestiada, Vassilis Mavridis, said, adding that the group tried to enter through the Kastanies crossing.

This is the first time such a large group of migrants and refugees has attempted a crossing en masse at Evros, a move that Greek authorities are treating as a consequence of the announcement from the Turkish government on Thursday night that it would no longer prevent migrants trying to reach the European Union.

Sources at the border told Kathimerini that patrols have been increased in the area and barbed wire has been laid along the...

Ceremony held in solidarity with Italy

Greece and Minnesota: Parallels amid pandemic

Greece may shut down tolls to curb Easter exodus

New monograph for US foreign policy in Eastern Mediterranean

Passengers mask up on the Athens metro