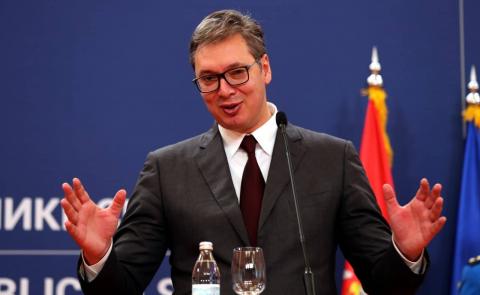 President Vucic also said that Kurti had deliberately announced the decision "the day before my trip to Washington" in order to spoil it, and further criticised the decision to only lift taxes on imported raw materials.

"To abolish the tax on our wheat, which you get for 20 euros cheaper per ton than from Northern Macedonia, is required by Albanian businessmen to make cheaper dough. But, on the other hand, Serbian financial products, Serbian chocolates, Serbian cookies and Serbian powder - that doesn't interest you - where maybe the Serbs could make a profit," Vucic said on Friday, directing his remarks at Kurti.

He added that Serbia had waited before commenting on Kurti's decision because it "wanted to look at everything that was said so that we could evaluate something in the right way".

Vucic also claimed the support of the US Presidential Envoy for the Kosovo-Serbia dialogue, Richard Grenell, who on Thursday said partly lifting the tax was not good enough.

Grenell tweeted: "We do not support Prime Minister Kurti's half-measure. Our position is quite clear: the tariffs must be completely dropped. Mr Kurti is making a serious mistake - and that was made clear to President [Hashim] Thaci at the White House today".

Vucic said the US envoy was "completely right" and that "this is about attempting another fraud".

Some local leaders in Kosovo have also criticised Kurti over his announcement, made at a press conference on Thursday.