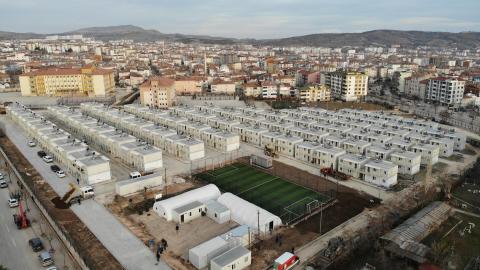 Victims of an earthquake in eastern Turkey earlier this year began moving to a "container city" on Feb. 28, composed of prefabricated housings.

Nine-hundred containers has been constructed in the Doğukent and 456 in the Kırklar neighborhoods of Elazığ.

Work is underway to build 4,806 containers in the region.

Sonay Elekci, a quake victim, told state-run Anadolu Agency he lives in one of the structures with his five children since their home was heavily damaged by the earthquake.

The effects of the quake are still being felt in the region, said resident Saadet Bayaral.

The 6.8-magnitude quake shook Elazığ province and other neighboring provinces on Jan. 24, killing 41 people and injuring 1,600 others, according to Disaster and Emergency Management Presidency (AFAD) data.
The epicenter of the earthquake was in Elazığ's Sivrice district and tremors were also felt in neighboring countries, including Syria and Georgia.
Earthquakes continued to shake both eastern and western Turkey over the weekend.
Two earthquakes of 4.5 and 4.2-magnitude jolted Elazığ early on Feb. 1, according to AFAD.
The earthquakes stuck 31 minutes apart at 2:32 a.m. local time and 3:03 a.m. at a depth of about seven kilometers.