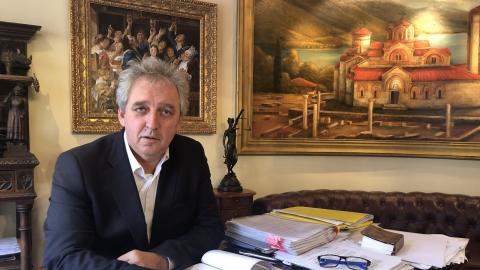 The people who have supported the formation of the new party are now also required to provide proof of citizenship, not older than six months.

Tortevski says that this demand is absurd and unnecessary because those who have signed notary statements have already legitimized themselves with their IDs or passports. "A non-citizen cannot have a passport or an ID," he notes.

Tortevski suggested things might have gone a lot more smoothly if they were not genuinely independent.

"The big parties misuse this system by supporting only those new political options that work in their favour," he said.

"If a new party [has potential …] to draw votes from the [main ruling] Social Democrats, then the [the main opposition] VMRO DPMNE party will help it with members and finances - to weaken the Social Democrats. It functions the same the other way around," Tortevski explained.

This is not Tortevski's first excursion into politics. "I have always been an oppositionist," he says.

At the birth of pluralism in North Macedonia in the 1990s, he was part of the small League for Democracy party, led by the prominent law professor, Gjorge Marjanovic.

He re-engaged actively in politics just before and during the so-called "Colourful Revolution" of 2016, when he joined the opposition to the then authoritarian Prime Minister and VMRO DPMNE leader Nikola Gruevski, whose rule crumbled in mid-2017 amid a deep political crisis, and was replaced by a Social Democrat-led government.

The public remembers him from this time as a frequent guest on TV debates and an active Twitter user, who gained many online followers.