Turkey to maintain trade with Iraq, Iran through buffer zones 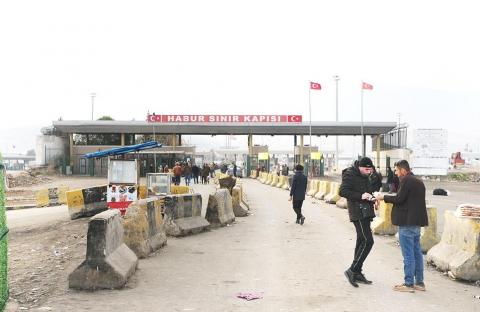 The International Transporters Association (UND), an umbrella organization of the trailer truck drivers, has developed a formula with the Turkish Health Ministry to carry on the cross-border trade with Iraq and Iran despite a travel ban to those two countries due to the coronavirus.

After the travel ban to several countries including neighboring Iran and Iraq was imposed by the ministry, the land transport was also suspended, causing distress on both sides of the border, an executive of UND told daily Hürriyet.

"Some 1,500 trailer trucks enter Iraq [from Turkey] every day. The same number of trucks come into Turkey from Iraq. There's a humanitarian side in this trade, because they [Iraqis] don't have any opportunity to get goods from anywhere else. The same applies to Iran," said Fatih Şener, the strategy and business development director of UND.

UND issued a notice to truck drivers and transportation companies on the new formula regarding the border trade through the Habur Border Gate on Turkey's Iraqi border.

The Turkish truck drivers would park the trailers at the buffer zone between Habur gate and Iraq's Ibrahim Khalil border crossing as of March 2, the notice said. They are supposed to wear gloves and masks in accordance with advises from the Health Ministry, which will provide assistance at the border gate, it added.

The trailers left inside the buffer zone by Turkish drivers will be taken into Iraq by another tractor driven by a driver from the Iraqi side.

"We are planning to put the same formula into effect with Iran in a week. Goods from Turkey in Iran are needed very much, because their border gates with Azerbaijan, Armenia and Afghanistan are closed," said Şener.

Egg exports on the hook<...