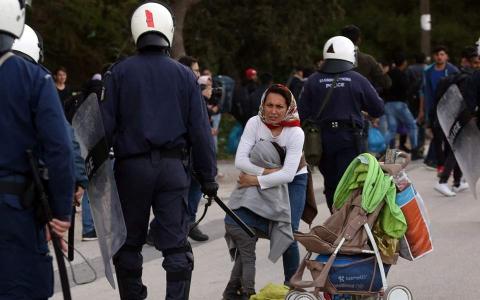 More than 2,000 refugees and migrants, holding their belongings, gathered at the main port of the island of Lesvos on Tuesday afternoon, following a rumor that a passenger ferry would transport them to the mainland.

The group walked the 10 kilometers from the overcrowded camp of Moria to the town of Mytilene, filling up the quay and surrounding streets, state-run news agency ANA-MPA reported.

Police forces were called in to push them back towards the camp, however manyof the protesters returned to the port believing the ferry will arrive in the coming hours.

It was not clear how the rumor started and how it spread among the migrants residing in Moria.

At the same time, ANA-MPA reported that numerous young Greeks gathered at the port to "defend themselves" after a separate rumor circulated alleging that asylum seekers armed with wooden bars would descend...