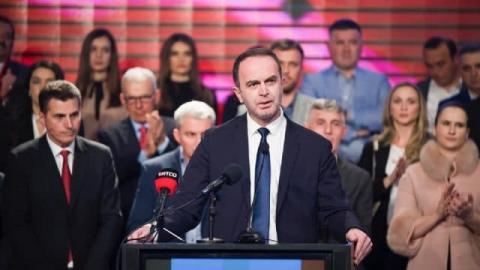 The territory claimed by both Tuzi and Podgorica includes the largest waste landfill site in Montenegro, a livestock market and part of the vineyards belonging to Plantaze, the largest wine company in Montenegro.

Representatives of Tuzi believe that their municipality should collect taxes from these businesses.

A demarcation commission has been negotiating about the boundary between the municipalities of Tuzi and Podgorica since last March and is due to meet again next Tuesday.

Gjeloshaj said he will wait until then before going to arbitration, which is provided under Montenegrin law if two municipalities cannot agree on demarcation.

On March 1, the mayor of Podgorica, Ivan Vukovic said the demarcation process had been temporarily halted but he believed that a deal is still possible.

"With a little goodwill, we can come to a definite solution to this problem. We need to get out of this problem in a way that is good for Podgorica and for Tuzi too," Vukovic told Montenegrin daily newspaper Dan.

If the case goes to arbitration, the government establishes a special commission headed by a legal expert, including representatives of the government and the two municipalities. The decision of the commission is final.

The Tuzi area borders the capital on one side and stretches to the border with Albania on the other. It is also known as Malesia, and is an area mainly populated by Albanians.

After elections in March 2019, an alliance of ethnic Albanian parties called the Albanian Forum and Bosniak Party established a ruling coalition in Tuzi.

Montenegro is a multi-ethnic state and is highly unusual in having no overwhelming community that makes up over half of its...