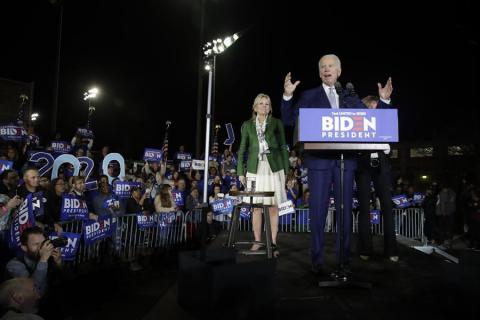 A resurgent Joe Biden scored sweeping victories across the country on Super Tuesday, backed by a diverse coalition that helped revitalize a moderate presidential bid teetering on the edge of disaster just days earlier.
But progressive rival Bernie Sanders seized the day's biggest prize with a win in California that ensured he would drive the Democrats' nomination fight for the foreseeable future.

And suddenly, the Democratic Party's presidential field,which featured more than a half dozen candidates a week ago, transformed into a two-man contest.

The two Democrats, lifelong politicians with starkly different visions for America's future, were battling for delegates as 14 states and one U.S. territory held a series of high-stakes elections that marked the most significant day of voting in the party's 2020 presidential nomination fight.
The winner will take on President Donald Trump in the November general election.

The new contours of a nomination fight pitting Biden against Sanders, each leading coalitions of disparate demographics and political beliefs, crystallized as the former vice president and the three-term senator spoke to each other from dueling victory speeches delivered from opposite ends of the country on March 3.

"People are talking about a revolution. We started a movement," Biden said in Los Angeles, knocking one of Sanders' signature lines.

And without citing his surging rival by name, Sanders swiped at Biden from Burlington, Vermont.

"You cannot beat Trump with the same-old, same-old kind of politics," Sanders declared, ticking down a list of past policy differences with Biden on Social Security, trade and military force. "This will become a contrast in ideas."