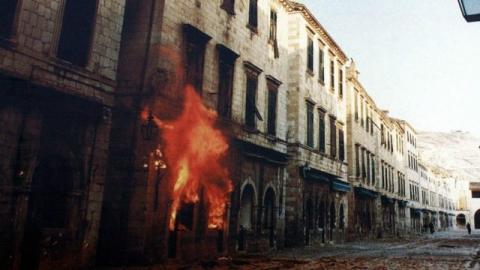 "Around 75 per cent of citizens have heard about the attacks on Dubrovnik, but half of them refuse to answer [when asked] who was to blame for the attacks," said Milos Vukanovic from the Centre for Civic Education.

"One in five think that the Yugoslav People's Army and the leadership of that time were responsible, while every tenth citizen said that the Montenegrin government or the main political leaders of the time were the culprits," Vukanovic added.

The attacks on Dubrovnik, which is close to Montenegro's border, and on the Konavle region that surrounds it, began on October 1, 1991.

The Yugoslav People's Army, including a large number of Montenegrin soldiers and reservists, besieged the town for nine months.

Dubrovnik's old town, which is a UNESCO world heritage site, suffered considerable damage during the shelling.

In 2000, Milo Djukanovic, then prime minister of Montenegro, formally apologised to Croatia for the suffering and losses that Montenegrin soldiers inflicted, particularly in the Dubrovnik area.

The Centre for Civic Education's survey found that a third of respondents believe that war crimes were committed by Montenegrin citizens in the former Yugoslavia, citing the deportation of refugees to Bosnia and Herzegovina as the most significant crime.

At least 66 Bosniaks and some ethnic Serbs were illegally detained and brought to the police headquarters in Herceg Novi, near the border with Bosnia and Croatia, from where they were deported on buses to Bosnian Serb-controlled territory on May 25 and 27, 1992.

Following the deportations, most of the Bosniaks were killed and their remains have yet to be found. Nine former policemen indicted...